Home » Outdoor Fun » Competitive Fun » Triathlon Training Tips » Dealing With Wind And Waves During Triathlon Swim Training And Competition
We write about products and services that we use. This page may contain affiliate links for which we receive a commission.
Pin
Share
Tweet 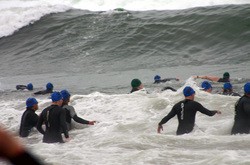 Last week, I participated in an Olympic Distance Triathlon in a part of the country where the weather was being affected by Hurricane Ike.

On the morning of the triathlon, there was a “wind advisory” or high wind warning for the area with gusts up to 40 mph. The lake was churning with high swells and white caps.

I began the swim in one of the first waves and on my way to the first buoy, it blew away. People became disoriented, and as I began trying to figure out where to go next, I heard the announcement on a bullhorn for all swimmers to return to shore immediately.

Panic-ridden swimmers began signaling for help, and a boat turned over trying to pull struggling swimmers on board. The remaining 10 waves were not permitted to do the swim, and the swim portion of the triathlon was canceled.

The whole experience prompted me to do this article about windy triathlon conditions because it’s not wise to assume that all the triathlon events you participate in are going to have good weather.

It’s just a matter of time before you experience a bad-weather triathlon, and windy conditions are probably the most adverse weather situation a triathlete has to contend with.

First off, very rarely is a triathlon swim canceled. Lightning would be the most common reason.

The swimming portion of a triathlon will not necessarily be canceled because of high wind and rain. Occasionally, the swim course can be altered to better adjust to weather conditions, but not always. At times, participants may be given the option of doing a duathlon if the swim course is deemed to have an unusually high degree of difficulty because of weather conditions.

Know Your Own Swimming Abilities Don’t expect the decision to be made for you in terms of whether you should or shouldn’t swim in difficult waters at a triathlon event. You must decide for yourself if you are capable of swimming in high wind, white cap type open water conditions.

Generally, if you are a beginner and an inexperienced swimmer, seriously consider opting out of an event where the swim involves such difficulty. There are exceptions. Say, if it’s your first triathlon but you are a Navy Seal, the water conditions are likely not to bother you.

It is a rare occurrence and it’s not my intention to stir up fear, but there have been triathlon fatalities during the swim portion of a triathlon that involved bad weather conditions.

How To Prepare For Rough Swim Conditions There are some things you can do to prepare for a triathlon that has challenging weather conditions.

The main thing is to train during such conditions. Watch your local weather and keep your eye on wind velocity. When a day rolls around with 15-20 mph winds, head to the lake and do an open water swimming session. Don’t do this training session alone. Either swim with a couple of other swimmers (a group of 3 or more would be ideal) or have someone follow you in a boat, kayak, or canoe.

How To Swim Through Waves

Basically, when swimming in high waves the trick is to avoid doing what your brain tells you that you should do. It seems like the thing to do is to pull your head straight up and out of the water in order to avoid swallowing water, and to be able to grab a breath and climb over waves. The problem is, once you raise your head and shoulders up, your legs go down and you begin exerting twice the energy to go forward.

Chances are, you will still get hit by an incoming wave anyway because you may not be able to get high enough over the wave as it breaks. When you raise your head and shoulders up straight out of the water, the waves will actually push you back and you will be making no forward progress. As a result, you’ve got double trouble — you’re expending too much energy and not moving forward and you are going to get fatigued and you might panic because your attempts are failing and you are still swallowing water.

So, instead it’s better to ride atop the waves rather than fight them. Keep taking your side breaths as is typical of the freestyle stroke. There should always still be that pocket of air for you to take your breaths.

The modification you need to make will be possibly be rolling a little bit further to your side in order to make sure you get that breath — or exerting a slight bit more energy to raise yourself up a tad when it’s time for you to turn for your breath.

Riding the rolling waves can be a strange sensation, and it may feel like you are not moving forward, but you are. You will still need to sight your buoys (probably more often than normal) in order to stay on course.

Swimming Tips The Day Of The Event After checking it out, determine your strategy. For example, you might say to yourself, “Okay, getting to the first buoy is going to be rough because I will be swimming right into the waves. I’m just going to accept that it’s not going to be business as usual. I’m just going to take it slow and do the best I can. After I turn for the next line of buoys, the waves are going to be coming in on my side and could easily push me off course, therefore I’m going to give special attention to sighting. On the last leg, the waves will be helping me back to the finish line and I’m home free.”

A Word About Aero Wheels On Windy Days

Just a final quick note:  be aware that windy conditions also significantly impact the biking portion of a triathlon or training session.

Aero wheels (especially on your front wheel) may do more harm than good — especially if you weight under 180 pounds. A 165-pound triathlete riding a bike with aero wheels with 20 mph winds may have a hard time keeping their bike on the road as a result of cross winds.

So, m
ake sure you travel to a triathlon event with 2 sets of wheels, in case you have to make a last-minute adjustment due to weather.