The training and hard work that goes into competing in a triathlon, whether a sprint or ironman distance, is a fun and rewarding experience.

Swimming, biking, and running to the finish line is an accomplishment to be proud of!

But before earning the celebratory medal, you’ll want to:

To get through the race, you need not only mental toughness but a wide variety of equipment, clothing, and other essential items that might not seem obvious from the outset. You can’t just ‘wing it’ and expect a flawless photo finish.

Here’s the triathlon gear you’ll need, plus some training/racing tips that I’ve learned in my years as a triathlete: Goggles: There’s nothing more annoying than foggy, leaky, or ill-fitting goggles. You may have to try different styles to see what works best for you. Keep in mind that open water swimming is a lot different than pool swimming. Being able to see the horizon while lifting your head out of the water is an important part of “sighting” the course. If your race starts while the sun is rising, you may need goggles with a metallic lens — so you aren’t blinded when you lift your head out of the water while looking at the horizon. Make sure the pair you choose is in good working order before your first race. TIP: For foggy goggles, rub saliva on the inside lenses. Sounds gross to spit in your goggles, but it works and will not irritate the eyes like an anti-fog spray might.

Wetsuit: A properly-fitted wetsuit is key to having a good swim leg of the race. Definitely go to a shop to try on different styles before making a purchase. A good triathlon shop will help you with fit. Many races require a certain wetsuit thickness, as well. Be sure your triathlon wetsuit meets the race’s requirements. Neoprene thickness ranges from about 1mm-5mm. The suit should be tight, but not too snug. The neoprene thickness around the shoulders and arms should be the most flexible and is usually thinner through that part of the body. TIP: Some triathlons don’t allow wetsuits, so be sure to find out if your race is wetsuit-legal.

Tri-suit: It’s the 1-piece or 2-piece quick-drying suit that you wear under your wetsuit. It’s the clothing you will also wear on the bike, so it usually has padding to make biking more comfortable — especially for longer races. TIP: Unless you want to chafe your inner thighs, don’t wear running shorts on the bike.

Body Glide: If you know you’re prone to chafing, rub this stuff on the hotspots — including the soft part of the skin underneath the armpit where your trisuit may rub while you’re running. TIP: Some people use anti-chafe stick prior to putting on their wetsuit while others apply it later in the race, after the bike and before the run.

Towel: This sounds like a no brainer, but dry off after removing the wetsuit, and rub the debris off your feet before putting on your bike shoes. TIP: You’ll be less prone to blisters and chafing if you’re dried off. 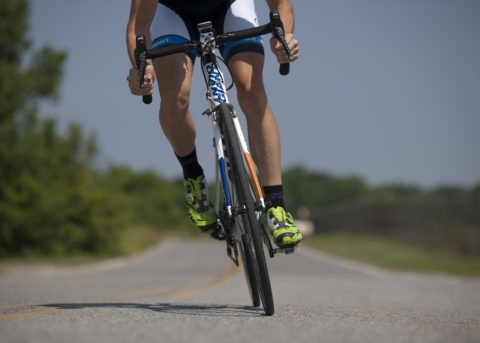 Bike: A TT bike (or triathlon bike) is not an essential piece of equipment, although the aerodynamics of those bikes will allow you to ride faster than if you’re on a road bike with aerobars. Not everyone has the money to throw down on a super fast carbon bike, however. Plus, it’s about the rider and if you’re a strong rider, you’ll have a strong bike segment of your race. Intervals and hills are an important part of training for a triathlon, not just riding the flats. Be sure to study the bike elevation map of your race, so you can train appropriately. TIP: A GPS watch or Garmin is a nice piece of equipment to have so you can monitor everything from your heart rate to cadence. In cycling, pedal speed is measured in pedal strokes — revolutions per minute (rpm).

Clipless pedals and shoes: Road bikes and triathlon bikes don’t come with pedals. Some newbies may not know this. Pedal and shoe choice is just as important as the bike itself. Choose a pedal and shoe that’s designed for triathlon, as opposed to road biking (unless you already have the road bike set-up and that’s what you want to use). Triathlon cycling shoes tend to breathe better and have a wider foot opening, with a velcro strap or two across the forefoot. They are easier to slip on during the transition rather than messing with the road bike shoe that usually has a ratchet or two and a smaller hole to get your foot into.

Socks: Always up for debate, but most people don’t wear socks on the bike. It eats up too much transition time and may not be necessary if your heels don’t blister on the bike. The run is a different story…

Race belt: If you don’t want to mess with pinning your number to your trisuit get a race belt, they’re cheap.

Hydration and nutrition: Practice eating and drinking during your training to dial in what works best for you. Everyone is different and this can be tricky. There’s nothing worse than being calorie deficient and dehydrated. TIP: Catch it before it becomes an issue — because you can’t make up the deficit after the fact. Once you hit the wall, it’s hard to recover without your race suffering. Shoes: Races are won and lost on the run leg of a triathlon. Set yourself up for success. A quality pair of running shoes or triathlon shoes is a good investment. Some people choose to run in traditional footwear for running while others like the tri-specific shoes that tend to drain better, dry quicker, and come equipped with quick-lacing systems. You can always put quick laces into your regular running shoes if you want to shave off a few seconds.

During the T2 transition is where some racers throw on a pair of socks. If you know you’re going to blister on different parts of your feet — the inside of your foot, toes, or heels — why chance it? Take the time to put on a pair of socks. TIP: If you’re worried about blisters, consider carrying a few bandaids in your tri-suit. While you’re transitioning, don’t forget to take a few chugs of water.

Hat: A breathable hat with a good bill is a must, even if you wear sunglasses. Keep your head cool by wearing a light-colored hat and squeezing water onto your head every chance you get. Overheating from the sun is the worst and a sure-fire way to drain your energy and ruin your race. TIP: Keep drinking water, too. You’ve already lost an amazing amount of water through sweating.

Nutrition: You don’t want to rely on the aid stations to cover you, especially since they may not be carrying what you need. Carry your gels, salt tabs, etc. in your race belt.

The most important tip of all?

Smile: throughout the race and as you cross the finish line. You signed up and paid the money to do it — might as well enjoy! You wouldn’t want all your race pictures to reflect a grumpy face.

I’m an endurance athlete, a pop culture junkie, a dog lover, and a full-time freelance writer.

Tips & Suggestions For The Beginner Triathlete: The Ultimate Guide To Getting Started In The Triathlon Sport